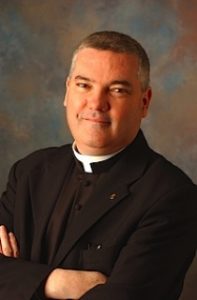 Monsignor Michael M. Boland to Step Down as Administrator and Chief Executive Officer of Catholic Charities of the Archdiocese of Chicago after 30 Years with the Agency

(August 6, 2019) – Monsignor Michael M. Boland today informed the Executive Committee of the Board of Catholic Charities of the Archdiocese of Chicago that he will step down as the agency’s administrator and chief executive officer, effective August 16, 2019. Monsignor Boland has been with the agency for 30 years.

Cardinal Blase J. Cupich, archbishop of Chicago, has asked Kathleen Donahue, a nearly 40-year veteran of the agency and its director of programs, to serve as acting administrator and chief executive officer, and to support the search committee as it seeks a new leader. Cardinal Cupich has asked Monsignor Boland to serve as a consultant to the agency and to advise and assist in the search process until November 2019 when he will begin a sabbatical.

“Leading Catholic Charities in the service of the poor and vulnerable has been an honor and privilege,” said Monsignor Boland. “I have been blessed to work with our able and wonderfully dedicated staff and volunteers to provide competent and compassionate care to those in need. While my heart will always be with Catholic Charities, it is time for me to step back, rest and transition to a new phase of my priestly ministry.”

Now in its 101st year of service, Catholic Charities Chicago has an annual budget of more than $200 million. It delivers services at more than 174 locations in Cook and Lake Counties with a staff of 3,000 and the help of more than 15,000 volunteers.

“I am grateful that Monsignor Boland has agreed to assist us in this time of transition,” Cardinal Cupich added. “The generosity of spirit that has motivated him over the years, once again leads him to help ensure our brothers and sisters will continue to receive the basics of life, a second chance, and most of all, hope. His example encourages each of us to carry out the Gospel mission to love and serve the poor. There is no finer legacy for a Christian than this. We are all indebted to Monsignor Boland,” Cardinal Cupich said.